Dog Play Behavior: Are they fighting or playing?

“What is dog play all about?” This is one of those comments I hear from various folks…and often get questions about. Both in and out of my dog training classes in Santa Barbara. 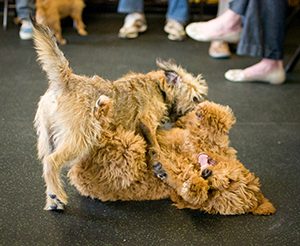 Humans commonly assume when dogs “hump” or “mount” it automatically means it’s of a sexual nature or that he or she wants to be “dominant.” First off, the word “dominant” is subjective, so I avoid using it. And frankly, if dogs were being “dominant,” and trying to take over the world, we’d likely end up playing at the beach all day, napping, and eating lots of treats – not such a bad gig. As for the sexual nature, sure this is an action that is included in canine copulation, but not for times they just want to play. Here are a few training tips on the theory of dog play.

Dog play has been described as “practicing the four F’s,” developing skills necessary for survival and passing on their genes. Hunting for food, finding a mate, avoiding “the enemy” so they can create more of themselves successfully. It also has been proposed that engaging in dog play helps with team collaboration, whether it be getting along with dog at the dog park, hanging with humans at home, or performing Search and Rescue activities.

This list of the four F’s is as follows: 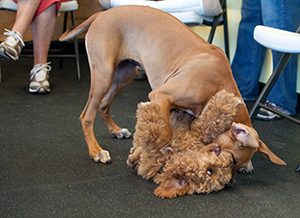 It’s important that dogs learn what acceptable dog play is, and what is appropriate – that is what dog social time is for!!! Yes, we can give the dog a “time out” if we don’t like something… but dogs (really important for puppies especially) are learning about what play is – and doggy DNA is telling them to “hump” – most likely trying to get the other “animal” to play.

If humans don’t like it, the best thing to do is completely walk away and ignore the dog completely, but throw a party and play like crazy when he or she is playing the way you want… Older, well-socialized dogs, who have great play skills can help “guide” younger pups…the older one will “tell him” (growl or a snap) to knock it off if he or she has gone too far.

A BIG note of importance: DOG PLAY SHOULD BE RECIPROCAL and CONSENSUAL! Sure, for some dogs they’d rather be the chasee vs the chaser. How to tell? Look at the one being chased – are they running off and trying to hide the entire time? Cowering under anything they can find? Trying to find their guardian? Or are they egging the chaser on? “Come on! Chase me!!” 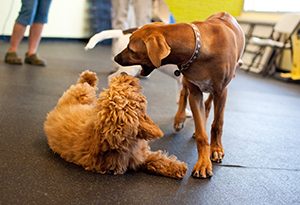 A great “consent test” is to restrain (gently) the one who is chasing or pinning and then observe the one who you think is being harassed. What are they doing? If the latter stops and looks at you as if he or she is saying “What’s up? Why’d you stop us from playing?” then that’s a great indicator that the play session was consensual. If on the other hand, the harassee looks relieved, then it’s safe to say that playing referee and interrupting play was a good idea. This information will give you insight into what steps need to be taken for helping these dogs – or any dog – develop good play skills.

Providing opportunities for our dogs to socialize and play is very important for their overall well-being and development as well-mannered canines – dog training classes, workshops, and socials that practice reward-based, humane techniques can help provide them. You just want to keep an eye on the situation, making sure that play-time is safe and fun for everyone!