Impulse Control and Dogs: if dogs had any, they wouldn’t be dogs, would they?

Today was session number four of my dog training Manner’s Class at the inquisitive canine studio. It’s one of my favorite to teach, but also one of the most intense and informative. Why? Because this session starts to bring all of the previously learned elements together, along with learning all about impulse control, and how to teach your dog to have a little!

We started with puppy push-ups, practicing the separation of verbal and visual cues (two separate languages you know), then loose leash walking part one exercises. This was a nice way for everyone – dogs and humans – to warm up their mechanical skills, and their brains. One we were all warmed up, it was time for teaching the technique of “reward removal”, or, punishment!!! Yep, just because I’m a positive reinforcement, non-coercion, and non-aversive dog trainer, doesn’t mean I don’t use punishment. Sure I do – but it’s the type that shouldn’t cause the nasty side-effects the other old fashioned nasty methods do.
Okay, so now it was time for the impulse control specific exercises:

The first step of any new behavior: reward what you want. I had the humans practice their first visualization exercise: paint your Norman Rockwell picture – that’s what you reward! For many it was: 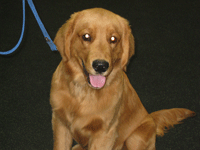 I saw many people practicing perfect skills! You can see Riley here in this photo – he learned very quickly if you sit, your own guardians give lots of treats, plus other humans say hello too.
Jacob learned to take treats gently, and Esi figured out that sitting at the door made it open more quickly.
As for the myth busting, we had some of that too. Not sure who came up with dogs wanting to be dominant or aggressive by going through doorways first – how silly is that? I believe it’s just they’re a lot more excited than we are about getting to the other side first. However, having them sit first, or at the very least waiting until you give them an “okay,” is appropriate.
Maybe we could learn a little something from our exuberant pooches. Life would be much more exciting if we humans were that happy about every little thing that happened in our daily lives…