Being a true inquisitive canine, I must ask the humans out there “Who came up with this whole ‘pack’ mentality mumbo jumbo?” Is it because we have descended from wolves? Wolves travel in packs because they have to hunt large prey – the large, fast (and delicious) beasts require more than the lone wolf to take it down…hence, the reason wolves form packs – it cuz they’re hungry and gotta get the job done.

As for us domestic canines, well, you don’t see stray dogs forming packs do you? Nope – they’re either found, end up in a shelter, become feral, or die. But they certainly don’t roam the neighborhoods forming packs. I believe you humans do that more than us dogs. I’ve heard about the “gang” “clique” and special groups such as “yahoo” and “google” phenomenon.
My mom the rockin’ Ventura dog trainer clears up this kind of stuff in her dog training classes and dog training workshops. Allow me to continue to clear up the muddy myth waters of us canines right here in this dog training blog:

A very aware dog mom wrote in to our Noozhawk dog behavior advice column about her own dog being left alone, and some concerns she had. Allow me to elaborate on some of the issues I mention above: 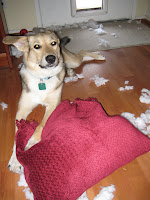 As mom says again and again in her dog training classes and with her private dog training clients: “Don’t wait to train a behavior when you need that behavior.” In this case, it’s best to crate train and condition your dog to be left alone before you’re having to head out the door, rushed, for a long period of time. It’s best to do lots of “dress rehearsals” so your dog gets used to being left alone, and actually begins to enjoy it.
So, speaking of descending from other animals, I’ve heard you humans have descended from apes. Well I wonder, do you live in tree’s flinging poo at each other? Hmm, something for this inquisitive canine to ponder.