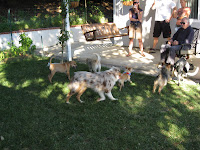 As many of you know, this dog lover and certified professional dog trainer is a huge supporter of all things animal rescue. However, I know that many folks, even some of my great inquisitive canine students prefer purebred dogs and would rather buy their four-legged friend from a breeder rather than adopt from a rescue or shelter. Check out the photo – there are mutts, mixed breeds from shelters, from private rescues, and top dollar dogs from breeders….can you tell the difference? I didn’t think so…unless you know them personally.

Well, I say that’s fine, as the choice is yours, but please make sure the breeder is reputable, professional, respects the profession and has clear-cut meaningful intentions for their contributing to the increased pet population. I came across a disturbing story in the local Ventura County Star newspaper about a local breeding kennel here in Ventura County. The allegations included they had over 100 animals and were using aversive training techniques. This is quite upsetting as it seems these folks do not have the animals welfare as top priority.
The American Kennel Club has posted some guidelines on their website about choosing a breeder. As a professional certified dog trainer, who works with all sorts of dogs from all sorts of backgrounds, the following are some of the highlights I’d like to touch on, based on what I think are important when forming this dog-human relationship.
Responsible Dog Breeders:
As a human, I would be allowed to carry another persons child for monetary compensation. But wait, I’d have to do this legally, otherwise I’d be in big trouble. (Don’t worry, I have no intention of doing this – I just wanted to use it as an example). There is paperwork, fees, money changing hands etc…and not everyone is allowed to do this, right? And who knows what the child would turn out like? I’m a nice person but I’m certainly not perfect, and who knows what kind of DNA misfiring could occur.
So why is it okay for anyone to breed a dogs and sell them! Is it because dogs are “owned”? Is it because the government is too busy running this country into a deeper deficit to care? Purebred dogs certainly end up in shelters – but does the attitude then change? Would someone wanting to purchase a purebred dog feel comfortable “buying” one from a shelter or rescue group?
Allow me to bring up one other topic of breeding. The AKC mentions they want breeders to breed to preserve the breeds characteristics. This to me is a slippery slope. Why? Because our domestic dogs were initially bred for behaviors that many humans now complain about – including watchdog behaviors (barking, fear and aggression towards strangers), hunting (including the “grab-shake-kill” sequence of predatory behavior), water dogs (can’t keep ’em out of bodies of water including the pool), retrievers (put everything they can find in their mouths)…and the list goes on.
So what SHOULD we be breeding for? Well, I look at the human-canine relationship as more of an emotional relationship – similar to how we choose our friends and mates. Meaning, if I were to play “mutt-matchmaker” I would set someone up with a dog that fit his or her personality, versus looks or nondescript subjective breed characteristics. I love helping people find their true canine match. As a matter of fact I offer a complimentary monthly public talk on “Before and After You Adopt“. The “before” part is helping folks decided on which animal is best for them. The next session at the inquisitive canine studio is August 23, 2009.
Dogs are animals. They are individuals. They each have their own personality, likes, dislikes etc… I’ve said this many times, including this post on dog breed discrimination. Isn’t time we ask that the breeder profession be taken more seriously? I would think those that follow the rules would prefer there be more rules, including laws and regulation of the instituted laws.
If I’m not legally allowed to manufacture and sell anything I want, then why are humans allowed to breed animals and sell them whenever, wherever, and to whomever they want?